Today we’re continuing with the countdown to the release of my upcoming picture book, BRAVER THAN BRAVE, illustrated by Eunji Jung, and published by Capstone Editions, a Capstone Imprint. I present Days 21-24 of 26 Days of Facing the Chicken Exit!

A monarch caterpillar named Little One from HELLO, LITTLE ONE, exists in a lonely green world. It longs for a friend. One day an orange butterfly lands nearby and makes a connection. Although embarassed, Little One is brave and responds, making a new friend to end its loneliness. 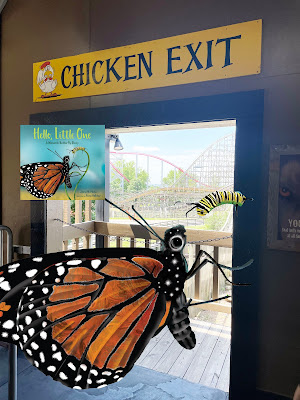 “I don’t like water sports. I know a lot of people love swimming or boating or whatnot. I don’t really. I think it goes back to almost drowning as a child or something. Now, I have worked on it because others have said I was silly for being afraid of water; but you know except for cruises and calm lake kayaking I still don’t like water or water sports. What inspires me to be braver in many aspects of my life is when I rock climb regularly. I have never been very good at it but I have certainly felt braver in many areas of my life when I struggled against that infuriating over hang or when I actually could complete the climb as planned. It was all about besting myself. Strange rock climbing over water skiing!” 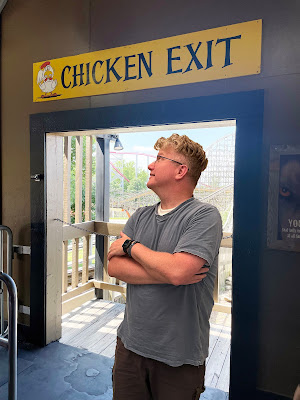 DAY 23: Janet Sumner Johnson (Me!), author of BRAVER THAN BRAVE
“One morning, when I was 6, my brothers and their friends built a bike ramp to jump off while waiting for the bus. I was new at riding my bike, and the jump was too big and scary for me. I sadly made my way home while they stayed and jumped. Not long after that, one of my brothers came home with bloody hands and cuts on his face. The ramp had collapsed when he tried to jump it. Suddenly I was glad I’d taken the chicken exit! Sometimes the chicken exit is the best choice, even if you don’t realize it at the time.” 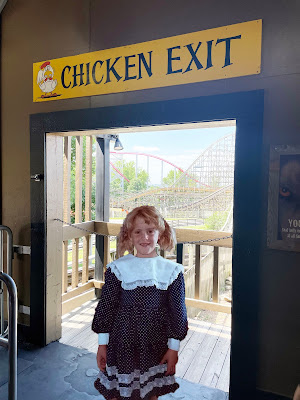 DAY 24: Jessie Oliveros, author of THE REMEMBER BALLOONS
“When I learned how to drive as a teenager, I refused to drive through the heart of the city. I couldn’t handle the lane changes and traffic! So for years I took the “chicken exit” by taking the highways around the city and that worked out great! Then years later I went home to help a family member in the hospital and had to see and hear and do hard things. The first night I left the hospital, I could have gone around the city like usual. But what I had done that day was so hard that suddenly driving through the city didn’t seem so scary anymore. So I did! And I was okay and I’ve done it many times since. Sometimes we can take the chicken exit until we are ready not to!” 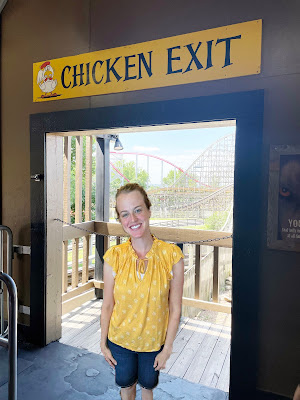 I hope you enjoyed Days 21-24! If you want to learn more about Wanda’s Chicken exit, you can pre-order a copy of BRAVER THAN BRAVE at any of the following links (or wherever books are sold):

If you’ve missed the previous Facing Down the Chicken Exit Posts, you can find them here:

DAY 1: The Legend of the Chicken Exit