Confessions of a Soccer Mom 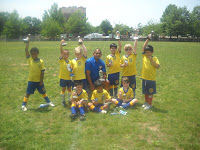 I love soccer. LOVE it.
And I love my son. Even more than soccer.
So you’d think that watching him play his soccer game would be like eating ice cream AND a brownie. Right?
So here’s my confession: It’s not. It’s actually painful to watch. Painful, I tell you!
Now before you lynch me, it’s not my kid. I really do like watching him learn to play the game. Rather, it’s the game as played by seven-year-olds that hurts. Perhaps it’s because I played competitive soccer. But perhaps it’s just painful no matter who you are. And the funny thing is, it reminds me of reading through one of my first drafts. Here’s why:

1. The players don’t work together. Any given player will take out his own player to get the ball.

2. The poor players trip oven their own feet. Often. (It might have something to do with their shoe-tying abilities, but I can’t be sure.)

3. The players forget which direction they’re going. And that’s usually the fortuituous moment that their aim is accurate.

4. Lack of coordination. Sure it’s funny to watch Charlie Brown put all his force into kicking that football only to have it pulled away by Lucy, but it’s more cringe-worthy when you know the kid. And yes, they really do land on their backs after kicking air. Ouch.
5. By the second half, the players are T-I-R-E-D. The ball could be right in front of them, but they’re too tired to move their foot. As a spectator, it was hard to restrain myself from running onto the field to kick the ball myself, just to get the thing moving!