Over the holiday break, my boys and I had a chance to do some rock climbing on a climbing wall. You pull on the harness. They clip you in. You choose “Easy,” “Medium,” or “Hard.” And off you go.

It sounds so simple, and really, the wall isn’t that high. But about halfway up, I caught a glimpse of the down. I had to refocus myself on simply finding the next handhold. Conquering my fears one step at a time. 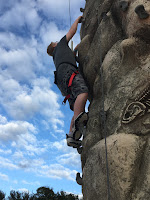 My 13-yo got to just about the same point when he called down, “I think I have to come down!” He’d hit that same wall. But he didn’t know how to get past it.

Now, I knew he was safe. He was buckled in. The rope and mechanisms would catch him if he fell. I’d already done it myself, and I knew he could do it.

So I called to him, “Keep going! You’re almost there. You can do this!”

And he did. He made it to the top. Pressed the buzzer in proof, then rappelled down to safety. Man, was that kid proud of himself!” He had faced down his fears and come out the other side as the conquering hero. There is something truly empowering in that.
.
Fear is a real thing. It can take hold of our minds and hearts, and can physically make us ill. It can keep us from doing the things we want to do, or from even trying to accomplish the things we want to accomplish. It whispers in our ears:
.
You aren’t good enough.
.

That is too hard for you.

You should stick to what you know.

But those are lies. If we refocus ourselves, take things one step at a time, and stop thinking about those fears, we can conquer them! Maybe not on our first try, but if we keep trying, it will happen.

Sometimes we need outside support, and that’s okay! That’s why you should surround yourself with people who build you up. People who believe in you. People who can see things from a different perspective. Find those people! Search them out, then hold them close. I know it’s made a huge difference in my life.

Conquering fears is hard. It can be scary. It can take time. LOTS of it! But I tell you what, that feeling you get when you finally make it is worth it.

You ARE good enough!

Nothing is too hard if you’re determined.

What fears are you hoping to conquer?

My kids tell me this all the time, and I’m pretty sure as a kid I reported this fact to my parents at least weekly.

The list goes on and on and on. From stupid things that don’t really matter, to big things that make us want to curl up in bed with a tub of cookie dough and watch nonstop episodes of [insert favorite show here].

Life isn’t fair. It isn’t. And though I wish otherwise, it probably never will be.

This past month, my family and I have been going through an unfairness. A life situation that is crazy! Unexpected. Silly. And utterly, completely unfair. And it’s not been a little thing. It will uproot our lives, and make things much more complicated in the months to come (lest you all worry overmuch, it’s about a failed house purchase for a reason that even the lender admitted to never having seen before).

There are all kinds of ways to react to this unfairness. Anger that it is happening to us. Stress and anxiety for all the changes to come and the added unexpected workload, not to mention expense. Sorrow for losing what could have been. Bitterness at the unfairness of it all!

Or, or, or, we can chose to be ducks. Face it head on, then let it flow off our backs like water. Trust me, I know that is easier to write than it is to live. I KNOW. But the situation is happening. It will happen no matter how we react. And though we can’t control the situation, we can control how we react.

And we can choose to be happy. We can choose to move past the unfairness, and focus on the good things that still fill our lives. Because there are good things. Lots of them. Sometimes it’s hard to notice those small happinesses when a big elephant of frustration is filling our vision. But a change of perspective, a shift of stance, and there they are. All those good things just waiting to be noticed.

Yes, it will take work. Yes, it will be hard. I know we’ll have moments where we stumble, or slip in the elephant’s poop (gross!). But I hope they will just be moments.

Here’s to moving on. Here’s to focusing on the sunny side of life and finding joy despite it all!

“Everyone wants to be successful until they see what it actually takes.”

I saw this quote on facebook this week. I don’t know who said it, but it was accompanied with a picture of a ballerina’s bleeding and bandaged feet. Success looked pretty painful.

And I bet you saw the picture of the physician after losing a 19-year-old patient that went viral last week. A moment of “failure” . . . probably after doing everything he was humanly capable of doing.

As I consider these two images, thoughts are swirling in my brain. Success is such an interesting concept. One word, but defined so differently from person to person. Are we only a success when we’ve reached the point of being a “prima ballerina”?

I once ran a half marathon. It was hard. It left my feet a mess, and gave me aches I still deal with. Am I a failure since I now choose to run shorter distances? I don’t see it that way. I see it as a success that I still run.

A person who writes a book, but never gets an agent or sells it . . . are they a failure? I don’t see it that way. I think they are a success for finishing the book.

Now don’t get me wrong. I believe very strongly in working hard to achieve something. And I don’t think we should hand out awards just for showing up (I really hate the trophies they give to everyone for just playing rec soccer or whatever). But as we celebrate the small successes, they can keep us moving forward when everything else would tell us to stop. Give up.

Work hard. Do your best. Don’t give in. And when you reach a milestone, celebrate! Don’t be afraid to recognize the quiet successes that litter our lives.

What is your most recent quiet success? I’d love to celebrate with you!

“If you write one story, it may be bad; if you write a hundred, you have the odds in your favor.”

-Edgar Rice Burroughs
This is a truth I keep reminding myself of when I am certain that everything I’ve ever written is horrible. Just keep writing. And may the odds be ever in your favor!! (Sorry, I couldn’t resist). ;)﻿

The Source of Inspiration

Since I actively joined the blogosphere, way back forever
ago, I’ve gotten to know a lot of other writers. One of the things I love
learning is where they draw their inspiration from.

Last week, Kimberly Afe talked about her inspiration for her
book, The Headhunter’s Race. A Zelda commercial, and poof! idea.
My awesome friend, Amy Sonnichsen, talked about her inspiration for
Red Butterfly (S&S, 2015!!) HERE. Her sympathy for another’s plight led to a
beautiful story.
J.K. Rowling dreamed of a boy with a lightning-shape scar,
and Stephanie Meyer dreamed of vampires. Inspiration that served them well.
The very first book I wrote was inspired by a longing to
return to my youth. To an easier, more carefree time. I’d just turned 19 which
(for a reason completely unknown to me now) was a huge deal to me. I was a
freshman in college, living on my own, having to be totally responsible for
myself. I had no one pushing me to do what needed doing.
And I remembered. Remembered the carefree days of exploring
the jungle of our backyard ditch. Of racing off on my bicycle with my brother
to go dig in the empty lot around the corner. And I wanted it back. The book
was a joy to write, because I just relived all the wonderfully crazy moments of
my childhood. I even included the awful ones that now make me giggle: getting
trampled by the whole soccer field; getting thrown in the ditch by my sister.
When I rewrote it (as my 3rd book), my inspiration came from
the present instead of the past. Foreclosures were popping up everywhere, and I
couldn’t help wondering how kids were handling it. I needed an outlet to express myself. The two ideas morphed, and
it became my first query-able book.
I was thrilled when I finally “finished,” but I
was worried . . . where in the world I would find another book idea?

—
—
Which now makes me laugh. Because they come at me from
everywhere. A cold became the idea for a humorous MG. A scary dream became an idea for an MG Horror. A horrible real-life
event became an idea for a YA Contemporary. A Wedding Dinner in France became
the idea for a novel set in France. My soccer team became the idea for a work
of adult fiction. They come at me so fast, I know I’ll never actually write
many of them.
But that’s okay. Because some ideas rise to the top. And the
best ideas will get written because they keep on inspiring until they must be put on paper for the world to see.
That’s the way inspiration works. At least for me.
Where does your inspiration come from?