A Book Deal and Publishing Secrets

I got another book deal! I’m so excited to share that my next picture book, A Bad Case of the Almosts, was finally announced last week! (My third picture book, and my fourth book!!! But who’s counting?) 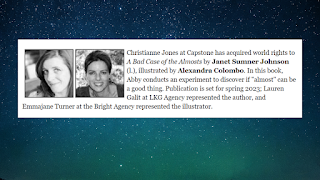 In case you can’t read that, here’s what it says:

Christianne Jones at Capstone has acquired world rights to A Bad Case of the Almosts by Janet Sumner Johnson (l.), illustrated by Alexandra Colombo. In this book, Abby conducts an experiment to discover if “almost” can be a good thing. Publication is set for spring 2023; Lauren Galit at LKG Agency represented the author, and Emmajane Turner at the Bright Agency represented the illustrator.

I wrote A BAD CASE OF THE ALMOSTS when I was struggling with them myself. I’d had a few books on submission that *ALMOST* sold, and it felt like “almost” was my destiny. Not quite there. Not quite good enough.

I commiserated with a good friend of mine, and she encouraged me. Told me to keep going and that she thought I was about to break through. That I was *almost* there. She could feel it.

I couldn’t, but it made me reassess. What if “Almost” wasn’t the stumbling block I thought it was?

I’m just thrilled to share this book with you, and I hope a few of you can relate to how it feels to be so close to something, then not quite make it.

So. You may have noticed that it’s slated for a spring 2023 release. That might seem fast for a picture book, but I have a secret to share with you about the publishing industry. I actually signed this picture book contract last June. Yep, 9 (NINE!!!) months ago.

With picture books, the announcement takes a while because once the author signs the contract, the publisher has to find an illustrator and get them to sign a contract before the book can be announced. And every publisher works slightly differently. Some publishers might jump right on finding an illustrator. Others might wait a bit because they are busy working on other projects. Some contracts are more complicated, so it might take more time to negotiate that contract. And it also depends on when the book is slated to be published.

All of that means nine months of waiting for a book deal announcement is pretty typical when it comes to picture books. I even know some authors who have waited over two years for a book to be announced! And let me tell you, it can be pretty hard to keep a secret for that long. So it’s an amazing day when we can finally share about a book that we are so excited for!

And one final note, for those with curious minds: Longer books, the kinds that don’t have an illustrator, those announcements can come much faster. Though not always . . . because negotiating a contract can still take time, which means months can pass between when an author first gets an offer and when the contract is finally signed.

Publishing is an industry of secrets and a test of patience. Which is why you will so often hear an author say: “I got great news today!! But I can’t talk about it yet.” Because like I said, keeping secrets–like a book deal!–is HARD! And when you’ve got good news, all you want to do is shout about it to the world.